2014 I made a little topdown racing game for the FireTV. The goal was to have a nice little game to play in front of the TV with your friends, like Super Sprint or Micro Machines in the olden times. 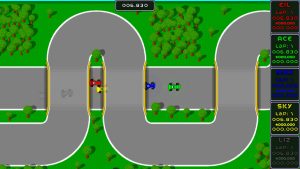 I still have some ideas for this and since there seem to be some people who actually want to play this game, I will add new stuff to Brumm over the next few months.