Currently available as an online playable alpha version. Windows version available for a small donation, Android version exists, but is not yet released, since it only works on devices with large screens and a more powerful cpu. 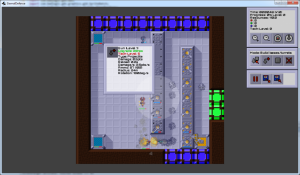 ut a tower defense game with elements from rogue-like games (huge, randomly created maps, where every room adds to the challenge) and constructions games (manage ammo and power support lines for your towers)? 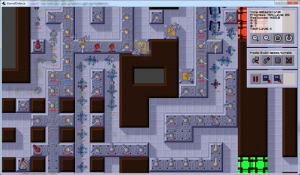 Then you need to play Eternal Defense 🙂 This game is currently in alpha (balancing is not that simple with such a complex game), but if you like you can already play a web version of the game. You just need the Google Web Toolkit (available as a plugin for most browsers).

Since the game has no tutorial yet, you will find brief instructions on how to play Eternal Defense a little bit further down the page.

Click here if you want to play Eternal Defense: PLAY! Have fun!

If you want to support development, you can send 5€ my way via PayPal, and you’ll receive the Windows version of the game (currently an executeable Java jar, so you need a Java runtime, it’s probably already on your computer, if not, you can find it here: Java Runtime Enviroment) and all future Windows versions of the game for free!

Thanks! The windows version features better performance, save games (inclusive autosave right before opening a door) and the radii are properly shown. In the long run it will also feature much larger maps, eternal indeed 🙂

Don’t let the enemies destroy your base. Shape their way with walls, build turrets and structures, collect crystals to open doors and tech to upgrade your turrets.

You win the game, when you open the final room and survive to the last enemy. You lose if the last of your structures is destroyed.

Structures power the walls next to them in a certain radius. Energy turrets need powered walls to work. They don’t need any ammo, but they tend to overheat, which leads to a few seconds of cool-down time.

Regular turrets need ammo, which is delivered by drones from structures.

Structures only delivery ammo and power in a certain radius, so you need to expand in order to conquer the level. Drone radius is always circular around the structure. Power radius is a certain number of connecting walls.

Right side, top to bottom:

Time: elapsed time (time factor)
Progress: game progress (opened rooms) in percent, enemy level
Resources: collected resources, needed for building walls, turrets and structures
Red, Green and Blue Crystal: collected from certain enemies, needed to open doors
Tech-Level: collected from certain enemies, needed to upgrade structures and turrets
Clock Icons: increase and decrease time factor, to fast forward if only slow enemies remain, or  slow down if there is too much trouble on the map
Show Radius: buttons to show the radius and state of your structures and turrets

Pause Game: opens pause menu, you can quit the game here
Load Menu: load the last autosave or one of three manual saves
Save Menu: save game to one of three save slots (saving goes not work for the web version)

Structure:
Shows data and radius and if available you can buy additional collector drones (to collect resources faster) and additional loader drones (replenish turrets with ammo) (radius currently not shown in web version)

Door:
Open door if needed crystals are at hand.